FFG has been publishing multiple articles about Runewars lately.  Unfortunately, we still don't have a release date.  I'm REALLY looking forward to the game.  Mechanics-wise, it looks a bit between Armada and X-Wing, but with fantasy troops instead of space ships.

When looking at the models, my favorite of the lot is the Carrion Lancer.  The model itself has an unusual look.  I'm so used to seeing skeletons on skeletal horses or in shambling hordes.  It's really nice to see a giant worm being used.  It's something different. 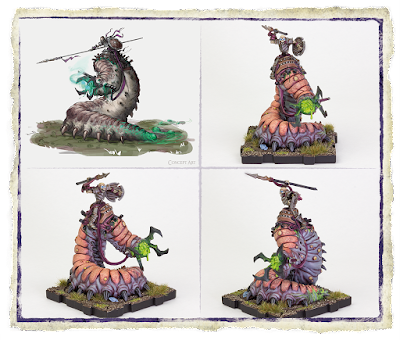 From what I can tell of the leaked bits of rules, units can be taken in "tiers".  For the Carrion Lancer unit, there are four available tiers.


My working assumption is that the larger units will get discounts that you'll end up spending instead on upgrades.

I still don't understand the movement/action dials well enough to comment.  On the below dial, the blue items involve movement with the white numbers indicating initiative speed.  I'm not sure yet if low numbers are quicker or slower.  The right side is a modifier.  So, you could select a forward march distance 3 at initiative 5 and then modify it with a left or right "bank/sloop" at a reduction of one distance.  You could also charge or "bank charge".  It's a neat scheme.  Red looks like fighting and green look like maneuvering/re-positioning. 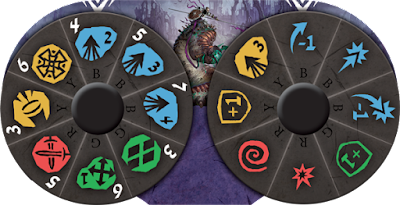 I REALLY wish they'd just go ahead and post the rulebook.  It would be nice to be able to read up on things before the game actually releases...  which looks like it'll happen in late March/early April.  It's been on the boat since 1/25 and they normally stay that way for 4-6 weeks with another 2 weeks or so of shipping to stores before release.  If we guess 8 weeks, that puts us right about 2 weeks from now.

I am so antsy for this game to hit.