I decided to play using a Legiones Astartes list focused on pre-heresy Iron Warriors.  The full list is as follows...
My first week's game was against the Dark Eldar Kill Team.  For the first game, we're only allowed to bring 200 points.  I'm terrible with their unit names, but the army consisted of a Succubus as Team Leader, 5x Wyches and 4x of the winged dudes.  Two of the winged dudes had some sort of high powered, 18" range melta/lance gun.  As you can see, there was plenty of line of sight blocking terrain.  This helped me out. 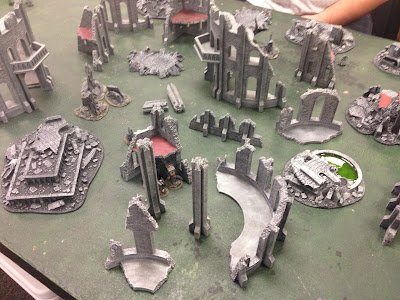 I decided to start the game out by hiding in little out of sight pockets in the gutted out buildings.  This hiding served me well. 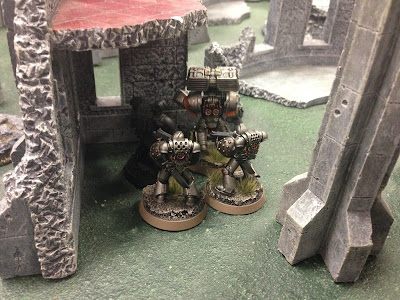 If the Wyches wanted to engage, they would have to run at me, out in the open.  I took a few pot shots, but the Iron Warriors are better at tearing down walls, not shooting devious, fast moving Eldar.  They made a mistake and got too close... 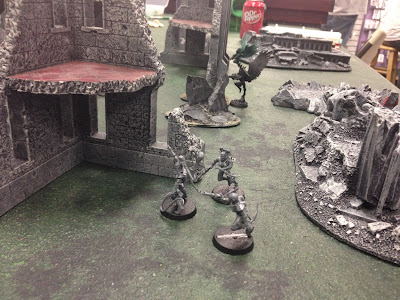 ...which let my Tyrant Siege Master assault.  The three Wyches were part of the combat, but ran away when they lost...  right into the open where Bolter fire finished them off.  Feels no Pain doesn't do much when your head is being crushed by a Power Fist.  Also, fancy 2+ cover saves don't help when your foe can literally reach out and punch you. 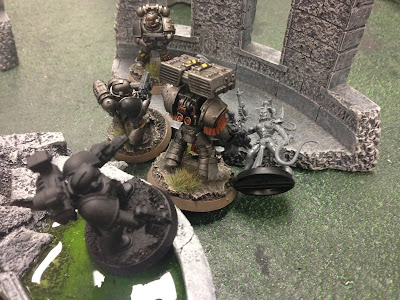 The only real snag I ran into is that one lone Marine outflanked onto the "wrong" side of the table.  He walked on and thought to himself...  "does that guy have bat wings?  shit."  Did not end well. 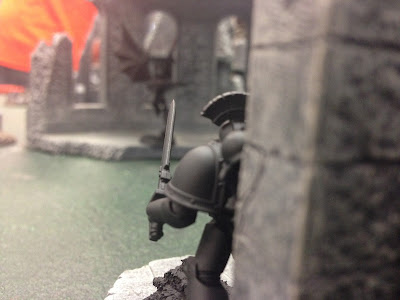 Overall, it was a great game.  I think we both had fun despite my more or less overwhelming victory.  My opponent chose to willingly rout after losing the Succubus.  The only model I lost was my Apothecary, who ended up making a full recovery.  Two of my opponent's models suffered permanent injuries that will carry onto the rest of the campaign, but they weren't relevant.  One was -1S to a model with a 2+ Poisoned weapon.  I don't remember the other.


That's a total of 25 Requisition Points.  I decided to spend points on the following...
More to come!  I have some painting to do.  I want to have my Kill Team fully painted by the time Saturday rolls around.