I am loving this game.  It has everything I liked about magic (mainly opening boosters) and nothing I don't like...  control, getting mana screwed, magic players (joking), etc.

Fantasy Flight Games just released an article showing off a few new cards.  I'm bored, so I'm going to stream of consciousness some thoughts about them...

First up is the Death Trooper.  He's a red villain with a cost of only 10.  That seems high for a non unique, but it allows you to field three of them together.  With four facings showing ranged damage, this guy is a very reliable performer.  I could easily see a deck with three of these guys and a ton of ranged weaponry performing well.  I doubt it'll be top tier, but it would do very well as a casual deck. 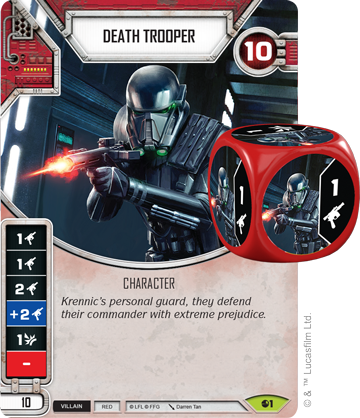 Next up is another red villan, Director Krennic.  He has pretty solid die facings and has a pretty interesting ability.  If you control the battlefield, you can roll in a Death Trooper (above) die when you activate him.  With a quick tempo deck, that effectively gives him an extra character die.  I think he'll see some action as a regular, but not as a unique. 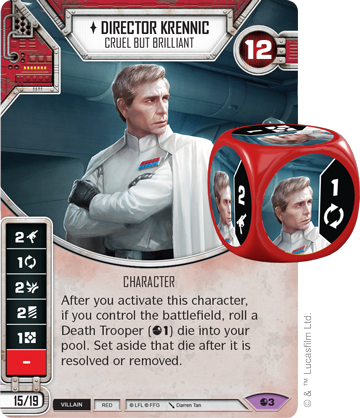 Palpatine is an odd character.  At 21/28 points, he's the most expensive character in the game.  With 15 health, he's also the healthiest character.  His die looks fantastic and his ability is amazing.  After you resolve one of his character dice, the opponent eats two damage.  Elite Palpatine will dump out four damage per round just by going about his business.  I think he'll be either killed super quick or will win super quick.  The rough thing is that at only 15 health, he's also the last healthy character LIST.  Most lists will have 20-24 health. 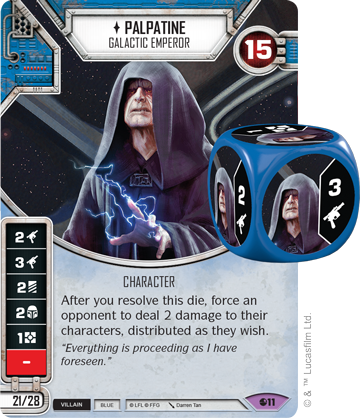 Force Lightning is a new blue ability for villains.  That means it can be played using a Sith Holocron, potentially getting around that expensive cost.  The card has a ton of ranged, admittedly with a resource cost on two of the facings, but that's still some serious damage.  The special is nice because blanks tend to be pretty common.  I can see this being added into nasty force villain users. 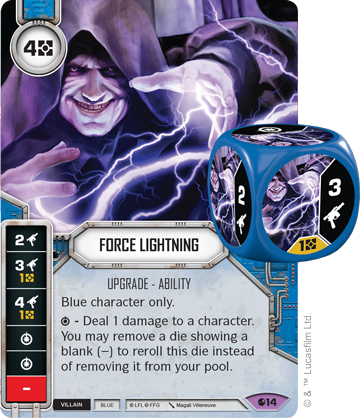 Jyn is the only hero character we've seen so far.  She's also pretty expensive, but just screams to be in a mill/discard deck.  One out of three chance for mill?  Yes please.  One out of three chance for ranged damage?  That works, too.  I'm waiting on the other cards to see what sort of teams she could be on.  20 points is REALLY high for an elite version of this character.  I'm kind of thinking eJyn/Rey would be good.  Time will tell. 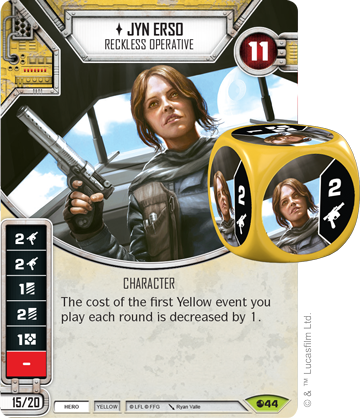 This is kind of a boring card, but very useful.  Any range focused hero deck should use this card.  It's a quick and easy dice removal card.  It can't remove damage, but it can remove just about anything else. 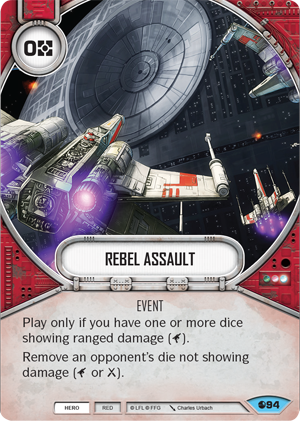 This is potentially amazing.  It's pricey...  but comes down to two resources if you're using Jyn.  Playing it with Jyn could net you either four damage or discard plus whatever your upgrade dice show.  If you're playing Jyn with guns, this could give you enough ranged damage to take out an average character. 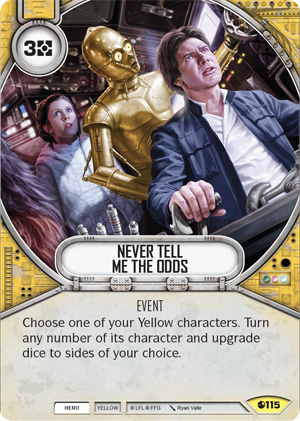 Last up is a blue hero support that let's you manipulate an opponent's die whenever you roll a shield.  This seems like a no brainer for a shield based Qui-Gon deck.  It's not glamorous, but it has great activation economy.  You use one action to play it and then it's a 'free' activation for the rest of the game.  This might be good in a LOT of decks. 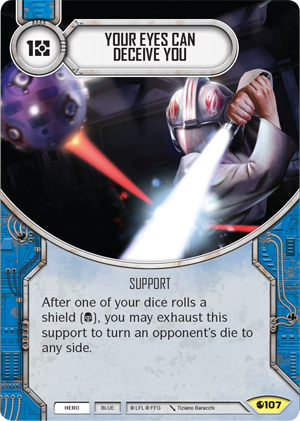 I can't wait to see more cards.  I totally love this game.