I played in a Star Wars Destiny tournament at All The King's Men in Pitman, NJ on Wednesday night.  I'd never been to that store before.  It's small, but nice and has a nice basement with lots of tables.  It's focused solely on card games, chess boards and a limited number of popular board games.  They're running another tournament next week and I'm currently planning to attend.

The store was using the Destiny OP Spring 2017 kit.  The kit contains the following goodies... 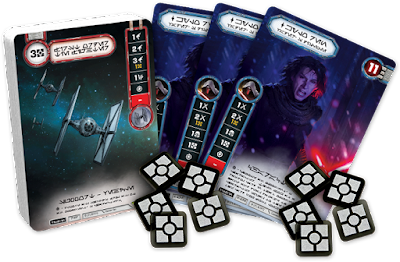 There was a $5 entry fee that covered the tournament as well as booster pack prizes for the top six players.  My buddy finished in 6th place, which got him a TIE Fighter promo card and two booster packs.  I finished a little farther down, but still got a TIE Fighter.  The tournament had 22 people attending, so I could easily have not gotten a TIE Fighter if I'd placed lower.  There are only so many to go around.

I brought my eRey/Padme/Rebel Trooper deck.  I screwed up big time and forgot that the Rebel Trooper has the Guardian keyword.  I went 2 and 2.  I'm pretty sure I would have gone 3 and 1 if I'd remembered that ability.

Here's the deck I brought...

The tournament showed me that I need to do some serious tweaking.  I don't have enough ways to screw with my opponent's dice.  Both games I lost were due to taking 7+ points of damage in one hit that I couldn't do anything about.  I'll be going through my cards over the weekend and making some changes.  I have ideas, but I don't know how they'll pan out.  I'm kind of thinking about ditching Rey and instead going with ePadme/2x Rebel Troopers.  I'll post the new decklist once I've figured it out.