I came from work to see a big brown box with a Masmorra sticker on the side.  Yay!!!  It's always exciting when a game you backed on Kickstarter ACTUALLY shows up.  Masmorra was originally expected to show up in November of 2016.  The actual campaign ended on March 8th, 2016.  That means I bought it and had to wait 308 days for my "pre-order" to show up.  These things truly take forever.

This is what all was in the box... 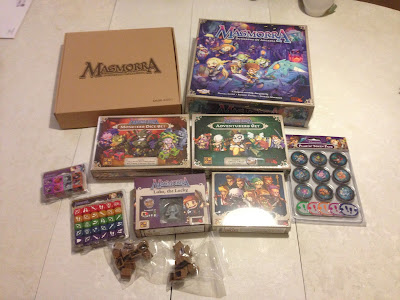 I picked up one of everything, plus an extra pack of the little treasure chests.  I think they'll be useful in other games, such as Descent: Journeys in the Dark.  I don't have much time today to go through the purchase, but I did get to take a quick look.

The cardboard box holds most of the Kickstarter exclusives.  It's really nice that all of these new models come with cards to use in Arcadia Quest.  The one box that has a terrible reflection on it above is the Arcadia Crossover Kit.  It lets me use all of the retail Arcadia Quest heroes in Masmorra.  It's nice when companies do this across games. 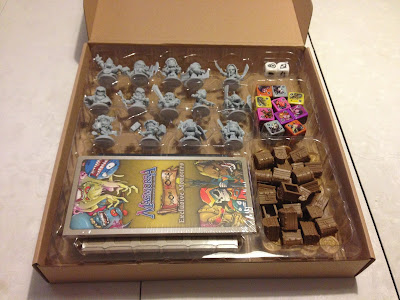 The dice are actually pretty cool.  One of them has a small tear on the image, but such is life.  It's not very noticeable and if I really need to, it's one of the dice I can buy a duplicate of later. 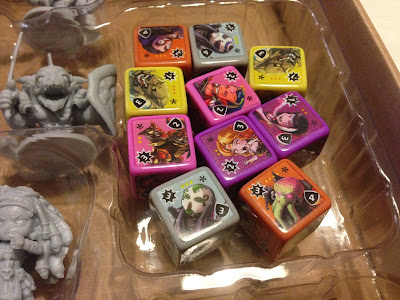