Storage is a Pain in the Rump

Having recently gotten into Star Wars Destiny, awaiting the first expansion for Arkham Horror TCG next week and having a tracking number in hand for yet another Kickstarter game, my mind is going to storage nightmare scenarios right now.

I've been researching how other people store things.  For a TCG like Arkham Horror, you can't just store it like Magic the Gathering.  Magic is easy...  alphabetical by set and then color.  With Arkham Horror, you're really dealing with multiple sets of cards at the same time.  You have act/agenda decks, encounter decks, player decks, etc.  You also have tokens that have to be maintained and stored with the cards.

It seems like a lot of people are recommending Broken Token.  Broken Token makes a flat pack, IKEA sort of thing that fits inside the regular boxes.  My thought is that I would need to purchase one of these every time a major expansion comes out.  That would more or less double the price of those expansions.  I'm not sure that's worth it.  They do look cool though... 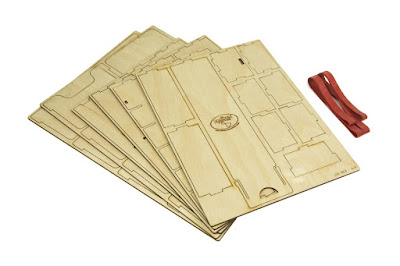 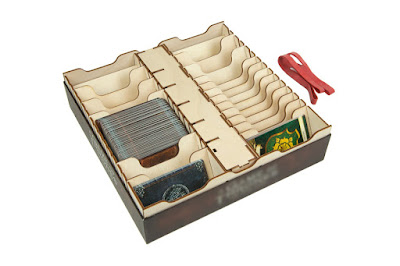 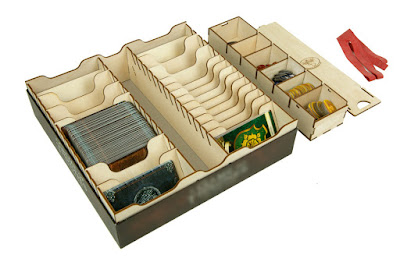 The red thing is a big rubber band used to keep the lid closed.  You can see that the wooden thing makes the box taller than it normally is, which means it won't really stay closed.  I'll probably buy one to see how it goes.  They're $25 on the company's site, but $28 on Amazon's with free shipping.  I'll make a decision tomorrow.