Before I dive into rant, everyone remember when choosing this objective, that the ambush zone is a one foot by two foot block in the center of the board. You measure in from each edge of the setup area, which means two full ruler lengths in from the short sides and three plus five in from each of the long edges (remember that one is larger than two through five when measuring). And your opponent can ONLY PUT ODD DEPLOYMENTS INTO THE AMBUSH AREA. 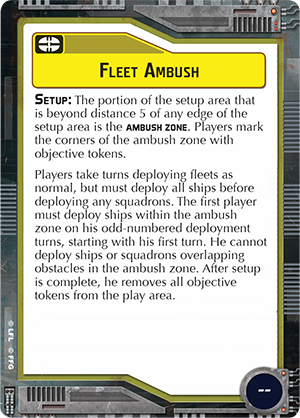 Also, this area is measured and marked before obstacles are placed. So, when you place your obstacle make sure you have a plan. I generally like to cluster them together to make getting out of the area a painful experience for my opponent. This is one of the only times, I might not take the space station for my first obstacle deployment, but that choice is dependent on my opponent’s list.

I find the best choices are a “L” shape or a line on the edge of the ambush area closest to my deployment zone. The line is a good choice against non-swarm lists. Any list with three or fewer ships will find the awkward deployment and obstacle placement difficult without a good amount of practice. The line is will make getting out of the ambush zone painful or prolonged. The goal with that obstacle placement is to help your opening turn or two of shooting. It’s strongest with fighter heavy lists or front firing ISDs. The line can help Ackbar lists as well, but you have to maneuver carefully. The usual swirl pattern can easily lead to a overlap or flying into an trap set by your opponent.

The L placement makes using that corner problematic because the ship in the ambush zone will most likely have to go over at least one obstacle. This placement offers the added benefit of helping to block ships deployed normally from aiding the strained comrades.

Either way, your goal by putting this objective into your list is to force your opponent to split his/her forces, and then exploit that split. You need to have a plan that suits your play style ready to go for any list you might encounter. Don’t go into the game assuming you’ll face two Gups or a pair of Raiders. You might end up facing a wave of bombers or pair of ISDs. Likewise, be ready against a small ship swarm. Mothma might dump four ships into the ambush zone with eight fighters and you’ll need to be ready for that eventuality.

The best plan from a player two perspective relies on threat identification after deployment to gain an activation advantage. Look to make the first kill and then build on the momentum. Ultimately, don’t let yourself get hung up on smaller details, pick the ship you feel is easiest to slaughter without risking one of your ships.

Once the kill is made, you’re opponent will most likely be a little off balance. Losing an activation in Armada is brutal and difficult to recover from. Now, you need to choose your next kill based upon what’s at hand with margin of victory in mind. Sometimes this means throwing dice into your opponent’s fighter ball, sometimes it means chasing down an ISD, and sometimes it means trying to kill two raiders a turn. Regardless, don’t let yourself get cocky. This objective forces your opponent to be vulnerable, and there is no point in taking it if you’re going to overexpose your fleet to similar risks.

In terms of commanders Ozzel can help with maneuvering. Tarkin and Iblis lend flexibility. But I prefer the murderous approaches of Screed and Ackbar. This objective begs you to run a ship killer list, and you should take this objective with a list that wants to get into the fight fast and hard. That said, fighter balls can do an amazing amount of damage, because your opponent is so close. At speed four, you don’t necessarily need Major Rhymer to put your opponent in firing distance.