I'm not generally a fan of the games that Soda Pop Miniatures puts out.  On the surface, they sometimes look amazing, but then the actual game play falls short.  I bought Super Dungeon Explorer and just ended up disappointed.

Hence, I'm a little hesitant about their current Kickstarter offering.  The game is called Rail Raiders Infinite and is about a group of outlaws from the future trying to loot a space train.  It actually looks pretty solid.  I'm a big fan of the chibi mini style.  If nothing else, I might be able to make some custom cards and use these minis with Arcadia Quest.

The game itself is only 50 USD.  Of course, you'll end up paying a little more when shipping is included, but that's really not a bad price for a game like this.  Currently, you're getting 10 heroes and 14 bad guy "Lawbots".  Chances are pretty good that by the time you're reading this, the number of bad guys has doubled through a stretch goal. 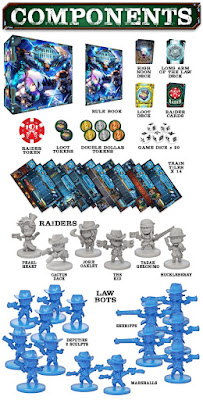 There is also a single add-on right now for a 5th player expansion.  The game normally only plays 2-4 players.  I might end up getting this expansion, but haven't decided yet.  This company doesn't tend to do Kickstarter Exclusives.  The exansion will be available via retail later, but might cost a little more. 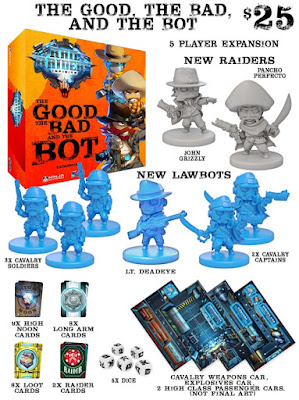 There are about two weeks until this campaign is done, so I'm expecting to see quite a few stretch goals come and go.  I'll probably post another update in a couple of weeks showing what I end up getting.

You can check out the campaign here...