This can be the best objective in the game, because it offers you a plan from the outset, especially if you’re playing Rebels. The major restriction is in ship selection, you really need to make sure you have at least two ships with a command value of three. But that’s more of a boon than a burden depending on the construction of your list. 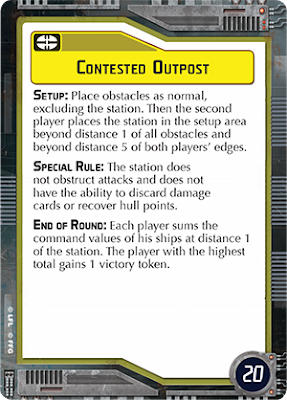 The major mistake made by players is a lack of three command ships to control the outpost. Two ISDs sounds like enough until Ackbar is on top of you like a feral animal, and you’re coming up short on both dice and command values. When I pick this objective, I typically have a total of nine command in my list (generally as a part of an Ackbar broadside offensive). For the Empire, think of this objective as something specialized to the VSD as it rewards both moving slowly and staying a confined distance. That isn’t to say you won’t have to issue a lot navigation orders to make sure you keep your enemy in your fire arc, but your opponent will have to contend with both superior firepower and a mounting 20 points per turn, which should be enough to force a tactical misstep and give you the upper hand.

This objective is much more effective if you setup in a pattern that forces your opponent to fly through a few obstacles are their way to the party, but it can’t be so crowded that you’re forced out of position. You want to practice your approach distances and speeds so you can deploy at least two setups incase your opponent decides to plunk an obstacle in the same spot you wanted put the space station. While tricky it is an achievable goal. If you look closely some of the obstacles don’t change position between versions of this setup, which affords you a chance to drop the first obstacle without giving away your the overall strategy.

To this end I recommend one of the below setups:

The preferred setup for the Rebel Swirl (or the Corellian C), and very easy to setup as your opponent only has two obstacles to block your positioning. The ideas is the position of the station matches the natural angle of the conga line. This setup lets you slide along a clear and easy path while pushing your opponent to do some tricky maneuvers simply to get into range alive.

The idea is to create a line of obstacles to block a convenient route to the station. It’s surprisingly easy to do with three obstacles. I tend to try to build off of one of my opponent’s placements. Done correctly, their ships will only have clean access to the station for two turns.

If you’re Imperials defend one of your two sides. The goal here is not to create a flawless trap to imprison your opponent and render them impotent, but rather to make things slightly more difficult thereby guaranteeing an extra victory token or kill. 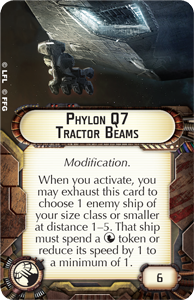 In terms of upgrades, the major hero here is the Phylon Q7 Tractor Beams. It’s a somewhat useful grade for slower moving lists, but in this objective it can keep your opponent in a constant state of frustration. At minimum, it’ll force them to set all their command dials to navigate.

The tractor beam gives the added benefit of confounding flankers and rear attacks from CR90s, Raiders, Gladiators, or even MC30c Frigates.

If you’re ship’s top speed is two, you want to consider Engine Techs. They can help make a crucial turn to keep you in range. Honestly, you can save the points by playing with the distances on your dining room table until you’re comfortable eyeballing things.

Motti is probably the best choice for the Empire as the classic wave one strategy still holds here. The VSD is a tank piece of equipment and giving them Motti can be close to cruel in a defensive strategy. If you put enough VSDs in range of the station and hunker down your opponent will spend a lot of time grinding into you, hoping all the while they can kill your list before the six turn limit runs out and they suffer a tournament run ending defeat. 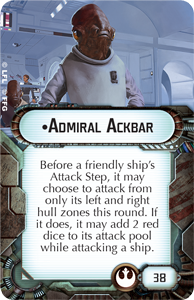 Ackbar likes to use Contested Outpost as a territorial draw against his opponents, similar to Fire Lanes. In a game where a lot of tournaments are decided by one or two points, most players will rush into an Ackbar gunline to stop the second player from soaking up 120 points. As a Rebel player with this objective your goal is to win by an 8 to 2 margin, at least. That works out to 120 points from the objective plus one more dead ship (or ace squadron) than your opponent.

I hope this was fun to read as well as somewhat helpful and informative. Until next time—She’s Got Admiral Ackbar Eyes.