While I'm waiting for my Cyclone Missile Launchers and Servo Harness to come in from Anvil Industry, I decided to work on a couple of the miniatures from Star Wars Imperial Assault.  I'm running a campaign for a couple of my friends, so I have a solid reason to do some painting.  They're not as detailed as an average GW miniature, but they're pretty decent.  Fantasy Flight Games may not make the best models, but they're consistent and the casting quality is generally pretty solid. 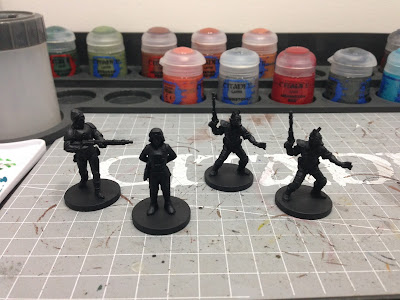 As you can see, I have Dengar, General Sorin and the two Rodians from the Hired Guns kit.  Dengar and General Sorin have a more or less fixed color palette based on the movies.  I'm going to try to stick to that.  The two Rodians will likely get brown pants with shirts to match whichever of the colored tokens I decide to go with.  The skin will obviously be green.

More to come as I intend to have these all ready for a game next week.  Right now I'm waiting for the paint to dry.