Fantasy Flight Games released a new product this week as well as some information about an upcoming expansion pack.  The product is this nice looking two player battle mat.  At 29.95 USD, it's not a bad deal at all.  I might consider picking it up.  I realize that these mats are a pure luxury, but hey...  I play a lot of these games.  Might as well treat myself every once in awhile.

The other bit of information released this week is regarding the second pack in the upcoming Death World Cycle.  It's called Unforgiven and looks like it'll be focusing on the Dark Angels, featuring a new Librarian Warlord named Epistolary Vezuel.  His ability allows him to draw a card every time you Deep Strike a card.  Nice, but pretty much dictates your deck build. 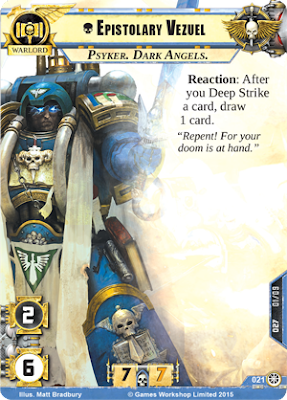 The war pack should also be including a series of Support cards designed to buff or otherwise enhance the usefulness of Elite units.  I know the below picture is small, but as an example, the Tyranid one allows you to exhaust to drop two 1/1 Termagant tokens on the same planet whenever you deploy an Elite unit. 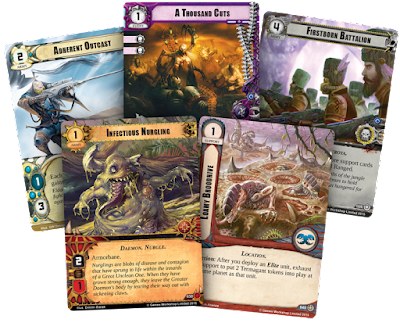 I'm pretty optimistic about this game still.  I was a huge Magic the Gathering fan back in the mid to late 90's, but the game is now unplayable in any meaningful way unless you're willing to spend potentially thousands of dollars a year FOREVER.  I like the concept of these Living Card Games where you the most you spend is 15 USD on a fixed contents expansion pack every couple of months.