Sunday night was an Imperial Assault night.  I'd called it a success, with a few caveats. 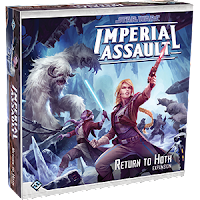 We decided to play the Return to Hoth Campaign despite none of us having played Imperial Assault before.  This isn't really a big deal though.  From what I can tell, this expansion is just "more of the same" but with different art, monsters and missions.  There are three new heroes and thirteen new bad guys.  The game also comes with tokens to represent bad guys whose models weren't included.  A good example is Dengar.  FFG sells little expansion packs for around 10-15 USD that include those models (so you don't have to use the tokens) as well as some additional upgrade cards and a side mission.  It's a pretty solid deal and I don't really mind that FFG is effectively selling "Day 1 DLC".

Here's an example of what are initial mission looked like.  As you can see, this isn't an enormous map.  I think this shot is from a couple of turns into the game.  The mission represents the player's initial flight from Hoth. 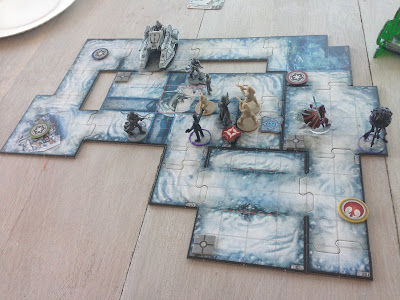 The first caveat is that the game seems balanced for four rebel players.  We had only three.  With three heroes, each hero gets three extra hit points (moving one guy from 12 to 15 as an example) and they collectively get an extra activation each round to share between them.  This means that for every round, each Imperial unit gets to activate and the three heroes collectively activate four times, with one hero activating twice.  Now, the hit point bump might seem nice until you realize that the average hero has around 12 or so and you're trading that potential 12 for 9.  In that sense, the extra three each is almost a penalty.  Four each might be more balanced.  The second major issue is that with one hero activating twice each round, they "tire out" quicker.  Activating twice as often also means you're resting twice as often.  That allows the Imperial player to capitalize on the down time and deal damage without fear of repercussion.

The second caveat might be wrong, but here it is.  The heroes don't know what they need to do to win at the start of the mission.  They're just told how to progress the mission.  Generally, once they progress the mission, they're told what to do.  It seems that if they don't actively progress the mission, they won't be in a good position to go for a win once they uncover the win condition.  In the second mission we played, the heroes needed to first open a door.  Once the door was opened, they needed to deal four damage to a "Force Vision" version of Darth Vader, similar to what Luke fought on Dagobah.  Unfortunately, the party took long enough opening the door that they were only able to deal three of the four needed points of damage to Vader before the clock ran out.

Given these caveats, we did a midstream correction.  The Rebels picked a fourth party member that they'll collectively pilot and we just gave that character enough XP and credits to catch up.  I'm also hoping that they play to the mission going forward.  The missions tend to have Bad Things(tm) that will happen either as the rounds progress or when certain events trigger.  Trying to achieve the mission objectives quickly means that fewer bad things will happen.

All told, it was a fun night (for me).  I think everyone else left feeling a little frustrated.  I feel like a bit of a jerk since I won both missions and three other people lost, but I'm pretty confident that future missions will be more balanced.  I'll post more as we progress through the campaign.  I really want to see the Rebel scum win so that everybody has more fun.