Per the designers, they were looking for a way to let groups of friends play a "mega battle".  To accomplish this, they made a couple of changes to the way you'd normally play.

The second change is that the objective cards aren't used.  The mission has the station in the center of the board, with each player starting at a corner.  Whoever gets their "objective ship" to the station first gets 50 victory points, with the next getting 40, then 30, etc.  Otherwise, scoring is done as normal. 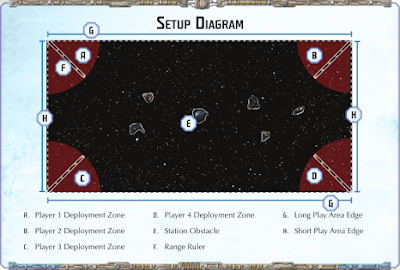 The final change is that fleet size has been decreased.  Normally, a game is 400 points.  In this mission, each player builds a 150 point fleet without a flagship.  In other words, no Commander upgrades allowed!

I'm really looking forward to this.

Check it out at the below link...