Hyperspace Assault aka A Fool’s Errand


Too often when I’m player one for this mission, I watch my opponent spread three tokens over the entire 6x3 play area. I deploy my fleet so I can shoot the closest token with two ships and then speed out of there. My opponent feels pressured to get something out of his ship before it’s too late and deploys into my waiting turbolasers. Womp Womp. 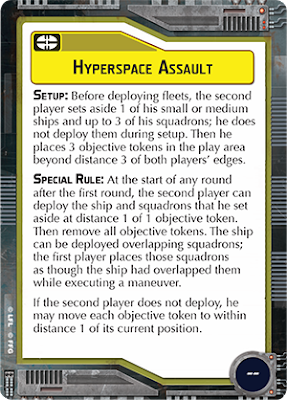 It sounds far fetched, but that exact scenario happens pretty frequently. Most players who use this objective get it wrong, and what should be the hammer of their fleet ends up being a sacrifice to their opponent. This is largely because of the objective’s strategic nature. Unlike most other objectives in Armada, you have to have a plan for this mission while you’re building your fleet. And not in a “I can pull it off” way. Your list has to have a completely defined six turn plan should your opponent take this mission.

Most players take this objective using the following logic: “I wouldn’t want an unknown ship and whatever squadrons coming out of nowhere at me.” Fair enough, but your forces aren’t coming out of nowhere. Really all this thought process does is leave you short a ship for a turn or two or six while you fight your opponent’s full list.

Then things only get worse when you deploy your reserve ship while your opponent has first activation. Your ship is hanging in the wind and getting pummeled by a huge fleet that’s already given them fits by using the activation and points imbalances to gain a significant tactical advantage. Afterall, all they have to do is keep the entry points in arc.
If you’re thinking about using this in a tournament, make sure you practice your plan at your FLGS until you feel sick from repetition. Make sure your fleet can do without the 42-100 points for however long it takes. And DO NOT under any circumstances let your opponent bully you into deploying before your ready.

The second mistake players make when they deploy their reserve ship is putting directly into their enemy’s primary firing arc. Wait an extra turn or two until the threat has passes and the conditions are favorable. After all, there is no point in deploying a ship for your opponent to use as target practice.

With all the draw backs, this objective might be one you leave at home. However, all hope is not lost. A disciplined player can make this mission a nightmare for their opponent.

Lets start with list building. The best three ships to use with this objective are: Gladiator, Raider, CR90, MC30c and Nebulon B Frigate with title. The Victory can do a good job too, but it’s low speed makes it a bit riskier. If those ships don’t interest you, then neither does this objective.

Four Solid Plans for This Objective:

Using one of your ships usually some form of Corvette to pop out of hyperspace and survive long enough to stop one or more of your opponent’s ships from moving. This move can be a bit telling when you’ve got one bumping ship and hold it back for the mission, but the beautiful thing about a speed three or four ship is there isn’t much your opponent can do about it. 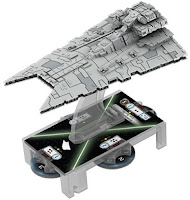 You’re going to hold a ship back until it can slaughter a damaged opponent. Great idea! But everyone tries to do this by deploying into their target’s rear arc, which makes it easy to counter. Instead whittle down your target’s shields and deploy the ship so it only has to crush one hull zone. You want to place your tokens to create a kill zone. My preferred deployment is a triangle roughly one stick apart. By doing this, you create a large amount of dangerous space. Then force the engagement to move in that direction.

The Gladiator with Demolisher and a few bombers can accomplish this with no problem. My favorite is a titled Nebulon B Frigate with Luke Skywalker and Nym. However, any ship will do so long as you deploy it with your opponent duel firing arcs. Don’t forget you set your dials when you deploy, so you can make a call about squadron commands or not at the time of deployment.

3) Deterrent and Board Control:

This is a bit of a sacrifice play, but positioning the tokens so your opponent can’t move comfortably. Your goal is to make him squirm as he tries to keep all your tokens in a ship’s main fire arc. Wait for an opportunity to harass, block, or kill a ship presents itself and deploy your ship.

The idea is to counter the traditional movement patterns used by specific lists. For example, the Rebel Towel Swirl is very weak to this attack. I like to place all three tokens as far into my opponent’s path as possible (3 off their board edge) outside the deployment zone, which is legal according to the card. But ensuring I will land in a manner uncomfortable for them with a significant threat. If you get good you can drive an Ackbar player nuts as they try to keep your tokens in arc, deal with your fleet, and not fly off the board or into their other ships.

This counter was built for the Raider with one its title upgrades. Nothing messes with a Rhymer ball like having a Raider dumped on top of it engaging everything in site. Yes, you’ll lose the ship, but not for a turn or two while you pour black dice into all his squadrons. It’s a nice bonus to an Imperial list, but you shouldn’t plan on your opponent having a fighter ball.

All of these ideas come down to placement and your movement. No one wants to spend a game where no one fires a shot and both players dance around in a circle, after all it’s your mission so you’d win out anyway. Setup your tokens in a reasonable area of the board, generally speaking 12-18 inches apart and try to give yourself at least two good deployment options.

I hope this was fun to read as well as somewhat helpful and informative. Until next time—She’s Got Admiral Ackbar Eyes.