I feel like this is the easiest objective to deal with in the current meta. This is the best objective in the world, if you’re playing Admiral Ackbar. If you’re not playing Ackbar, it’s a death trap. If you’re choosing your opponent’s objectives, don’t take this one unless you know exactly what you’re doing. And, honestly, even then it might not be enough. 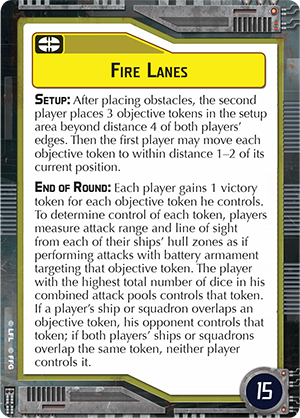 This objective embodies everything good in a mission for Ackbar, ISD lists, or even a VSD and nothing bad. The second player controls the tone and location of the battle. The second player will have a significant points advantage from turn one on. On top of that, the mission is restrictive, so players have to fly extra carefully lest they land on an objective and give the victory token to their opponent.

That said, if you are going to take this objective, Fire Lanes comes in three flavors:

Literally a stack of three tokens positioned by the second player so his broadsiding Rebel fleet can cruise passed soaking up 45 points a turn. The exact position of the stack shifts a bit depending on the placement of the obstacles and the type of ships in the Rebel fleet, but really it’s the safest bet in the world. The only downside is that most opponents won’t choose the objective because losing 90 to 0 on turn two sucks.

You set the tokens up with two on one side of the board and the third as far away as possible. This is a risky idea, but I’ve had it really help me in a few games. This configuration is favorable if you’re running two bruisers and one small ship like a Raider and twin ISDs.

The idea is to spread out your opponent’s fleet and hit them in waves. The same issues apply and the savvy Ackbar player will most likely cruise over to collect two tokens a turn, which leaves you free to dedicate a cheap ship to collecting the third token. I find this works best if you’re hoping to kill your opponent’s ships and you’re less concerned about scoring the other two tokens. This objective will let you play a piloting game and hopefully offer up the victory.

The idea is similar to the 1-2 Punch but favors small ship spam lists. The tokens are spread out across the board in a pattern that your ships would normally fly over the course of the game. It’s a tough gamble because Ackbar and ISDs can slash through hitting these targets at range, and you’re giving away at least some of your strategy.

Still, if you’re flying 5 or more ships (like a CR90 SW7 Spam), then you can drive your opponent crazy while they try to simultaneously nail down your ships and shoot the tokens. Meanwhile, you zip around pounding their ships and collecting 45 points a turn.

In terms of upgrades there isn’t much to talk about here. Expanded Munitions can give you the edge for the objective, but I feel like centering your plan around a ten point upgrade is questionable. Besides, your turbo laser spot is better spent on X17, Heavy Turbolaser Turrets, or Turbolaser Reroute Circuits.

If you’re looking to play a particular attack pattern and want to mess with your opponent’s movement, then Pylon Q7 Tractor Beam is a good choice. It can keep ships out of range, force them onto an objective, or simply help keep them in arc. Likewise, the Navigation Officer can help with a yaw or changing speeds at the right moment. Though, again, I feel like a well deployed plan will make these upgrades unnecessary.

In terms of commanders, Ackbar for the dice, and Ozzel for the movement are both good choices. Beyond that this objective doesn’t receive a direct benefit, even from my man Tarkin.

I hope this was somewhat helpful and informative. Until next time... She’s Got Admiral Ackbar Eyes.